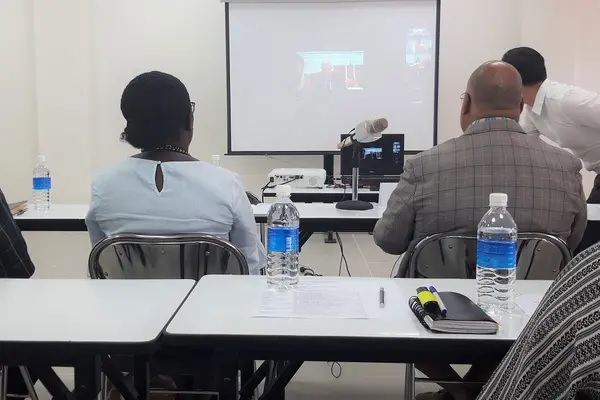 (TCSI): Government officials are slowly coming to terms with the new reality of attending intergovernmental meetings over internet based platforms.

With the advent of strict travel bans being imposed by authorities worldwide to curb the spread of the deadly coronavirus, public officials have had to look to alternative online solutions – embracing the use of technology to participate in global and regional meetings.

These meetings range from issues on climate change to international relations.

“COVID-19 basically has also pushed everyone to embrace technology that they have never embraced closely before,” Mr. Beck said.

He described how virtual meetings were now the new reality and said government officials are slowly but surely embracing the concept.

With most government money for such meetings being diverted towards the country’s recently announced economic stimulus package, Mr. Beck said video conferences are proving to be a real money saver.

“Sometimes some of the meetings, even if it's only for two days, you will spend more days travelling. I think during the crisis, it has pushed us to do things we would not have otherwise done”, he said hinting at the costs involved with such meetings.

An example of this was a virtual meeting done by senior officials in the Ministry of Fisheries and Marine Resources.

In that virtual meeting, officials joined 26 other Pacific Island countries and territories for the 12th Heads of Fisheries Meeting organized by the Pacific Community (SPC).

Such meetings usually involve officials travelling to a designated venue, however, with uncertainty on how long travel bans will be enforced across the region officials opted for an online meeting.

Led by the Director of Fisheries, Mr. Edward Honiawala, the Solomon Islands team were able to discuss important issues with other Heads of Fisheries from the different Pacific countries and territories.

Similarly, the Ministry of Foreign Affairs and External Trade (MFAET) were able to participate in a Special Meeting with representatives of the People’s Republic of China (PRC) and other pacific countries on the COVID-19 issue.

“There are some things that you cannot wait or you cannot postpone. This is the reason why we are basically doing that”, Mr. Beck said while referring to the online versions of the meeting.

The Government’s video and other virtual conferencing capabilities are being facilitated by its ICT Support Unit based in the nation’s capital, Honiara.